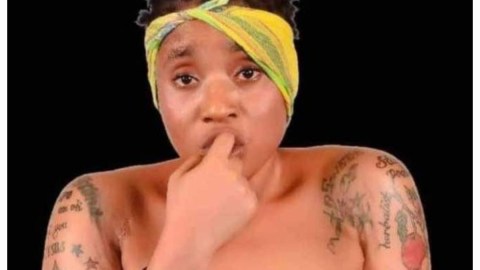 Pope Skinny has shared his two cents about the unfortunate demise of the slay queen who reportedly died while twerking on stage during a street carnival over the weekend.

Recall that eyewitnesses said Ama’s seduction while twerking wildly on stage attracted some guys who rushed on her as they harassed her sexually by fondling her ‘oranges’ while others inserted their fingers into her ‘hole.’

Reports say she was struggling to escape from them when she ended up falling off the stage and landed on the ground with her head down, resulting in her instant death.

Hours later, a close friend of Ama Obroni said the initial report is false and far from what actually happened. The lady said during the street jam, a challenge was thrown to the crowd that whoever is able to shake her bum-bum heavily will be given $100 — an amount that is equivalent to ₵583.

She continued by saying her late friend took up the challenge and during her performance, indeed- some guys decided to rush on her because she was n@kdd so she decided to bring her wild performance to an end. She was declared the winner of and when and while making her way down the stage, Ama was electrocuted.

Well, according to Pope Skinny the late Ama Broni should not be criticized for hustling for money.