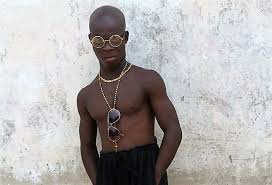 Ghanaian ‘Goat’ rapper AY Poyoo has had a steady rise to stardom after his unique style in the Ghanaian music industry.

Poyoo surfaced in the scene just under a year but he’s made several headlines within that period than several breakout artists.

According to him, just a little over a month since he first surfaced with his goat style music, he has over 10 collaborations with international artists that are yet to be released.

AY Poyoo has built quite a sizeable fanbase for himself which he calls Poyoorians.

He asserted that he isn’t that rich now but what’s of importance to him is that he can now provide for his family.

He stated in the Facebook post that he’s willing to work hard because he’s got a lot of ambitions and he’s grateful to all the fans who’ve supported him all this while.

“Everything started 8 months ago. Today, I’ve more than 10 unreleased International collaborations and my album is almost done(2021 will be )

I am not the richest man but I can now provide for the family. I’ve a lot of work to do because I want to win more.

The dream is big and I’m READY! To all who support me, thank you very much! I really appreciate it. Merry Christmas and please be safe out there